How Dogs Have Evolved to Have Human-Like Faces

If you find it hard to resist your pet’s "puppy dog eyes," eyebrow raise or adorable head tilt, you’re not alone. Dogs are masters at connecting with people, and unique changes to the muscles in their faces that occurred over tens of thousands of years may explain why.

The ability to produce nuanced facial expressions is key to the human-dog bond, and, in fact, when humans domesticated dogs, close attention was paid to the facial expressions that dogs produce, according to researchers with Duquesne University in Pittsburgh, Pennsylvania.

The team revealed that not only do dogs and wolves have significantly different facial muscle physiology, but dogs’ facial muscle makeup is actually more similar to humans’ than wolves’.

In 2019, the researchers revealed that a specific facial muscle responsible for raising the inner eyebrow intensely is found in dogs but not all wolves. They also found that dogs use the muscle to move their eyebrow more often and with greater intensity than wolves. The expression is known by many humans as "puppy dog eyes" and is also close to one used by humans when they’re sad.

That study, they reasoned, showed that "in only 33,000 y[ears], domestication transformed the facial muscle anatomy of dogs specifically for facial communication with humans." The latest study supports this finding, revealing that dogs’ faces are made up of 66% to 95% fast-twitch fibers, while wolves’ faces contain just 25% fast-twitch fibers.

"If you pick up a 10-pound weight, you can hold it for a full minute. But if you try to hold a smile in the mirror for a full minute, you can’t do it. Your face muscles get tired, because your face is dominated by fast-twitch fibers."

While wolves averaged about 29% slow-twitch fibers in their facial muscles, dogs had only 10%. "It’s quite a remarkable difference between dogs and wolves," Burrows said. "They just don’t move their faces in the same way."

The differences could account for the ways dogs are able to make human-like facial expressions that solidify their ties with their owners. According to the study, "The dog range of type II [fast-twitch] fibers mirrors the range found in human facial muscles, indicating that the domestication process in dogs also involved selection for rapid facial movement, similar to the movement seen in human faces."

Dogs May Mimic Their Owners Faces
Dogs are capable of mimicking the emotional states of other dogs, including facial expressions.7 This is incredibly intriguing, because facial mimicry in humans and non-human primates is a form of emotional contagion that is regarded as a basic form of empathy.

Researchers believe, given their findings that dogs mimic the emotional states of other dogs, that dogs can mimic their owners’ facial expressions as well, especially if they’re closely bonded. Seeker reported:

"'It is an automatic response, similar to that of humans when they see someone crying or smiling,' [lead author Elisabetta] Palagi said, adding that domestication probably even enhanced dogs' natural inclination toward emotional contagion all the more."

The totality of evidence is showing that dogs have many complex ways of communicating with and understanding not only other dogs but also humans. The researchers pointed out that dogs follow others’ gaze, head and body orientation, and combine body postures, including head and tail movements, to communicate their emotional states.

They also use their eyes, lips and teeth expressively and "regularly express their positive emotional states via specific signals that are performed through both the face (relaxed open mouth) … and the body (play bow)."

Dogs Evolved to Have Human-Like Faces, Barks
The featured study suggests that the evolution of faster facial muscles in dogs has allowed them to move their faces in cuter, more human-like ways, cementing the bond between humans and dogs, while wolves have retained their more wild faces. The changing facial muscles may also affect the way dogs "speak," using shorter barks as opposed to wolves’ longer howls. Burrows told Gizmodo:

So somewhere in the process of dog domestication, we selected for faces that were fast in dogs, faces that could quickly make meaningful facial expressions to communicate with us, but we also selected for a very fast face, one that could produce this new sound — barking."

Next, the team plans to study changes in ear muscles among dogs and wolves, revealing even more about the way dogs have evolved to communicate with humans


HOTEL: The booking link will take you to our block: American Shih Tzu Block 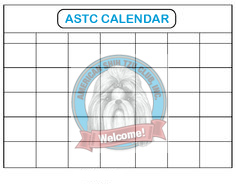